Where we get fit and spin (wool)

Why I Won’t Become Vegan any Time Soon.

As I talked about in my last blog article, the Law of Unintended Consequences is one of the overriding philosophies of my life. We just don’t know what our actions will do until it is too late. It isn’t always bad, it’s just what we think is going to happen may not always be what does. Which brings me to my topic of veganism. 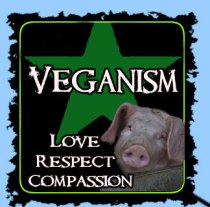 Veganism will lead to fewer animals

One of my friends is a vegan, and she sends me articles with her reasoning. One of the pushes for veganism is animal welfare. If no one eats animals, there won’t be any inhumane farming practices. Which is true. There would be no reason to keep cows, chickens, pigs, goats or sheep if you are a vegan. On the downside, there would then be almost no cows, sheep, pigs or chickens. And that is the unintended consequence. If you are  a vegan for animal welfare, than you must think it is better for there to be less of them. Lets face it, raising cows is hard. No one will keep them as pets. They won’t revert to the wild easily. So, there just won’t be many. Pigs of course, will fare better. They revert quite easily, to become a menace and a nuisance. Sheep and goats might be kept as pets by some, but the numbers will dwindle mightily. And chickens? Yes, they have their devoted fans, but unless you eat eggs, they aren’t that fun as pets. Also, as I can attest to, they are extremely easy prey for any predator, making keeping them alive a challenge.

Hunters spend lots of money to avoid this.

What is the monetary value of wild animals?

If you believe that it is better to have fewer animals than to have them in captivity, than your veganism is realistic so far. But how about wild animals? There is the logic out there, based on the truth that we have hunted many animals to extinction or near extinction, that hunting and eating animals is always bad for them. That would be true if no other factors involved. However, unless your concern for animals goes to the extreme of wanting to bump off humans, the opposite proves to be true today. Today the biggest threat to animals is loss of habitat and overcrowding. If there is not enough food for the wild animals they starve, and if there is not enough room for them, then there isn’t enough food and disease can easily spread. How land is allocated depends on money. There is a LOT of money to be made in developing land for housing and businesses. Both farmland and wilderness are being eaten up by this factor. We all want our little piece of turf, if we can afford it. While millions do live in cities, millions more move to the ‘burbs, turning the ‘burbs into smaller cities and creating their own outlying suburbs. It is cheaper to build on empty land than to tear something down and build over, not to mention all the people who kick up a fuss when you tear the old thing down. So, all that “empty land” that was home to deer, grouse, turkey, fox, skunk, opossum, bluebirds, yellow jackets, etc., etc., now becomes someone’s house and they don’t want the deer eating their bushes.

Hunters are good for animals

What was my point with all that? Oh, yeah, hunters. Hunters want places to hunt. They also want those places to be filled with critters to hunt. Hunters spend a lot of money to get that. They either buy land themselves to preserve it, go in on a piece of property together, or give political contributions to organizations to lobby congress to preserve hunting areas and the wildlife therein. Two organizations have been huge in this effort, Wild Ducks Unlimited and the National Wild Turkey Federation. Read this link to  Ducks Unlimited, and this one to the NWTF if you’d like to learn more. Money talks. Without hunters, there would be far less wilderness areas for us to enjoy. Hunters today are an enlightened group, they spend a lot of time talking about the best way to ensure the health and survival of the species they hunt. Sure, there are always going to be a few idiots of the “shoot anything that moves” variety, but there are bozos in any organization. For the most part, hunters are bigger conservationists than any other group, because they are out there in nature and they want it to stay that way. Without hunters, and there would be very few hunters if they didn’t eat the meat, there would be fewer roadblocks to development. 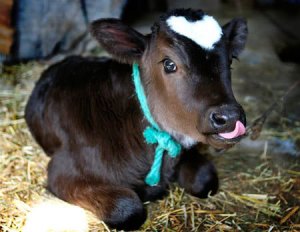 Where do cute cows come from? Maybe farms?

Farmers are good for animals.

You hear the argument that it takes so many more acres to raise a cow than it does to grow the vegetables that a human could eat to stay alive. That’s great! That is that many more acres that aren’t being paved over or having a high rise  or strip mall put on them. And guess what? Many game animals depend on those farmers fields as part of their habitat. So if you are vegan for animal rights, buy a piece of beef from your local farmer and give it to a meat eating friend. That way, he won’t have to sell his farm to a conglomerate that will either put up a shopping center or add it to a mega factory farm where the conditions are inhumane. If you really care about animals, support humane farming practices and conservation organizations. Then there will be plenty of happy, healthy critters running around and eating the veggies in your garden.

Emotionalism, not reality. If you really loved them you’d support the conditions that support their flourishing.